It’s no secret that in many places around the world, cuisine is more varied than the traditional American palate. North Americans eat a wide range of foods including a variety of fruits, vegetables and meats, but we often shy away from foods that would ordinarily be considered unusual in our context. Especially when it comes to eating meat, we tend to avoid many things that in other parts of the world are considered normal or even staple foods.

In other blogs, h.e.a.r.t. staff have highlighted underutilized varieties of edible plants (like moringa, chaya, mulberry and green papaya.) In many ways, there are also useful sources of meat that are similarly underutilized. Animals that can be raised domestically in addition to animals that can be hunted in the wild are common food sources for people all over the world, but the range of what is considered edible is generally culturally defined. Everything from beef, pork and chicken to snake, iguana, guinea pigs, and even dogs and cats can be considered edible; but depending on local culture, many available food resources may not be used to their full potential. 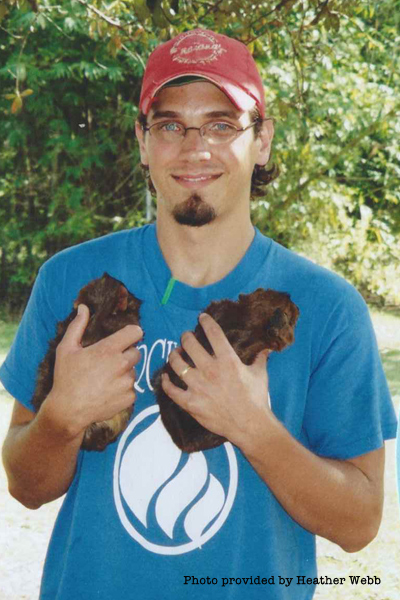 As a student at h.e.a.r.t. in 2002, I was interested in exploring the potential of domestic guinea pig (Cavia porcellus, also known as cavies) production as a source of food. While many cultures in South America consider guinea pigs a staple food source, most North Americans balk at the thought of consuming such cute critters that are generally considered to be pets. In my studies I found several advantages and disadvantages to raising guinea pigs as a food source.

Generally speaking, guinea pigs (gpigs) are easy to raise and require very little specialized knowledge to achieve relative success. There are a few things that are essential to know when raising gpigs specifically, and I’ll address those things in a moment; but overall they are hardy animals that can be raised with minimum expertise. Considerations for beginning a gpig project include housing, feeding, breeding and butchering. It should be noted, that this article is not an exhaustive source for breeding guinea pigs and anyone interested in breeding for meat production should consult multiple sources prior to beginning.

Guinea pigs require limited housing and since they can be kept in breeding groups (1 male:5+ females), it is possible to raise many animals in a relatively small space. Males can be raised together provided there are no females. However, housing multiple males with females is likely to induce fighting and injury. Females can easily be raised together and have even been known to assist one another in nursing their young. Gpigs are noisy and prefer dark corners, so small hiding places are a nice addition to their housing.

Cages are suspended at a height that makes them easy for me to access.

Typically guinea pigs are not big climbers, so housing does not need to have significant vertical space, and with some planning and regular maintenance, cages can be stacked to accommodate multiple colonies in a small area. Generally speaking, an 18×18 in. floor plan with 15 in. of vertical space is more than adequate for a single guinea pig. I use 36x30x18 in. cages for breeding colonies. It’s important to have appropriate flooring for the gpigs and although some rabbit cages can be used, in most cases the flooring would need to be altered to accommodate the smaller feet of the gpigs. Some breeders advocate for solid flooring with absorbent bedding, but I have had great success with ½ x ½ in. wire mesh. Note: Guinea pigs can be susceptible to colds and respiratory infections so they should be placed away from strong drafts or extreme temperatures. 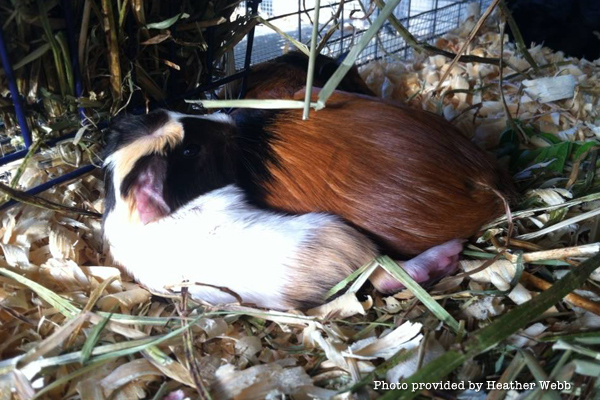 Inexpensive pine bedding can provide protection to the delicate feet of newborn pups.

When the guinea pigs are small or about to deliver new pups I use cheap pine bedding while their feet are very small, but in general, the wire mesh is very useful and allows me to be able to collect manure. The droppings from guinea pigs are very valuable and can be collected as fertilizer for gardening. Gpigs produce a lot of droppings and urine in a short amount of time and collection can be designed with limited effort on the part of the breeder. I contribute all of the droppings from my guinea pigs to a worm bin where they can continue to break down and be developed into great compost with the worm castings (worm manure).

One of the other advantages to raising guinea pigs is the fact that they are grass eaters and can survive and thrive on a limited variety of greens and grasses. The primary dietary concern for gpigs is that they require more vitamin C than rabbits or other rodents and they can develop nutritional deficiency in the absence of adequate vit. C. Fortunately, vit. C can be found in abundance in a variety of greens that are excellent food sources for gpigs. While the bulk of feeding can be done with grasses and/or timothy/alfalfa hay (pure alfalfa hay is considered leguminous and should be used sparingly as it can produce bloating and other intestinal problems in gpigs), feed can be supplemented with fruits and other greens rich in vit. C like oranges, moringa, kale and many others.

Guinea Pigs love food scraps like carrots, potatoes, fruit and vegetable peels, etc. and while commercial feed is formulated especially for the dietary needs of the animals, it is unnecessary, expensive and easy to avoid by feeding a variety of quality greens and grasses that can be cultivated and readily available in most developing world contexts. In addition to adequate food, gpigs need constant access to fresh water. Guinea pigs will drink water from a sipper/nipple or from a dish. However, if a dish is to be used it needs to be cleaned thoroughly and often to prevent harmful bacteria from growing in the dish and contributing to illness in the gpigs. For larger colonies, it is possible to design a simple watering system for several cages using a single water container, tubing or PVC, and watering sippers/nipples.

As in most species of animals, there are multiple breeds of guinea pigs to consider with regard to meat production. In the United States, where gpigs have been bred for the pet market, most of the available breeds are not as big as you might find in parts of the world where the breeding is specific to meat production. While we could discuss a number of breeds and their attributes, I have primarily raised Abyssinian guinea pigs due to their size and availability in the US. In another country, I would seek out the largest and hardiest breeds available. 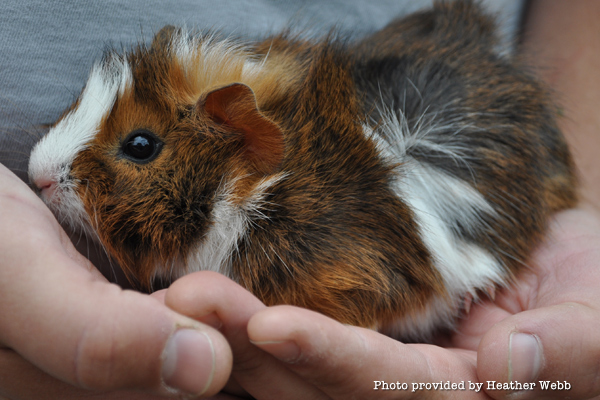 Abyssinian guinea pigs are distinguished by their cowlicked fur.

Guinea Pigs come into heat twice a month and a single male can be kept with several females at a time while the females are being bred and during their pregnancy. While gpigs take a bit longer for gestation than rabbits or other rodents, about 62-68 days, pups are born fully formed with open eyes and all of their hair. They can be weaned almost immediately, although for the healthier guinea pigs it is best to allow them to nurse with their mothers for about 2 weeks. Nursing mothers can be kept together with other nursing mothers and they do not need any specific nesting boxes or special accommodations for the birthing process. 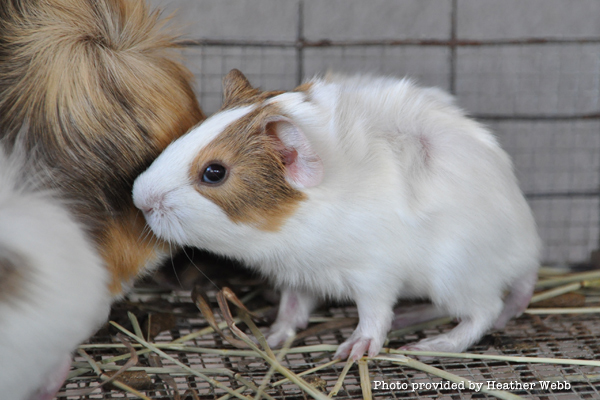 Guinea pig pups are born completely formed, covered in fur and with their eyes open. They can
immediately begin eating solid food, although it’s preferable for them to nurse for at least two weeks.

Guinea pigs are capable of breeding as early as 3 weeks, but it is best to allow them to reach 3-4 months of age prior to breeding. They can live up to 7+ years with quality care and females can handle multiple pregnancies each year. However, females that have not been bred prior to reaching 7 months of age are prone to severe complications in birthing and should not be bred. Mothers can go into heat shortly after birthing and are capable of being pregnant and nursing at the same time. For healthier and stronger guinea pigs, however, it is best to allow mothers a month or two between pregnancies. A typical litter size for guinea pigs is 3-4, although it is possible to see as many as 6-7 per litter in healthy colonies. In an aggressive breeding strategy, males should be replaced twice a year to avoid inbreeding.

Once guinea pig pups are born, it is best practice to remove the adult male from the group so that he will not rebreed the females too quickly or develop aggression toward the young. While mothers should be given a couple months of rest before they are rebred, it is relatively easy to develop a breeding schedule where new guinea pigs are being born almost continually and mature guinea pigs can be butchered for consumption on a regular basis.

Since guinea pig pups are born more fully formed than some other animals of similar size, they mature quickly and can reach full adult size in as little as 3 months. Best practice is to prioritize butchering non-breeding males as soon as they reach mature size to make room for more adolescent males and females. In my experience males born at the same time can be kept together for 2-3 months before they display any aggressive behavior to one another. Because I raise my guinea pigs in mesh cages, there are always females close by, so the males are prone to increased aggression as they mature. 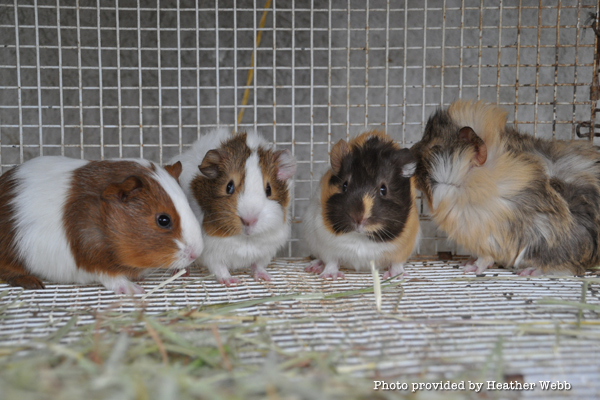 Males who are born together can be housed in the same enclosure for 2-3 months before they may
start displaying aggressive behavior toward one another.

Butchering and consuming guinea pigs has both advantages and disadvantages. Guinea pigs are not very large animals (approx. 1 lb. in the US) so butchering can be tedious for the amount of meat obtained per animal. However, in many contexts this can also be an advantage. In places where there is limited refrigeration, it is easy to butcher only as much meat as is needed for a single meal. I have found that a single gpig is a decent portion of meat for a single adult serving. Daily consumption of guinea pigs requires a lot of butchering, but no refrigeration of any kind, and due to their small size, it does not take a lot of time. Some people might be put off by the amount of bones in a single serving of gpig, but in cases where food sources are limited, the bones in a serving are of little consequence and can even be consumed along with some of the organs to add to the portion available in a single guinea pig.

While raising guinea pigs does require some special knowledge related to breeding, diet, and housing, they can easily be incorporated into a broader permaculture (permanent agriculture) design as a part of a system of gardening, animal husbandry and eco-stewardship. In the last year I have begun raising gpigs as a food source and have found it to be interesting, unusual, useful and enjoyable. It certainly isn’t necessary in my context, but it could be life-giving in another. 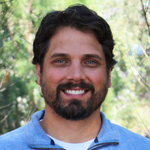 “The Guinea Pig: Healing, Food, and Ritual in the Andes.” Edmundo Morales. University of Arizona Press. 1995.