Mulberry: A Plant With Exceptional Potential

My first experience with a mulberry tree was nearly four years ago when I found the large specimen on h.e.a.r.t.’s campus covered with what looked like thousands of blackberries. Someone informed me they were edible and I immediately fell in love with the tree that produced some of the most delicious berries I had ever tasted. My initial love for a yummy berry slowly evolved into a deep appreciation for a plant with an incredible range of uses and potential to alleviate poverty in a wide range of climates. The excellent book Tree Crops: A Permanent Agriculture helped to solidify my affinity for the mulberry.

[The mulberry tree] has a reputation of fruiting so heavily that it stains sidewalks permanently and being a tree that is nearly impossible to kill. This is the kind of plant we want to have in our arsenal for fighting the looming issues of malnutrition, deforestation and climate change which are intimately interrelated.

The genus Morus contains the various mulberries of the world, at least 10 species. They come from a wide climactic range on different continents. This means there is a wide genetic base of strains that thrive in most climates of the world. Further trials and selective breeding could extend this range even further. Mulberry is known for being a rugged survivor and is rumored to have been used to push back deserts in China. It has a reputation of fruiting so heavily that it stains sidewalks permanently and being a tree that is nearly impossible to kill. This is the kind of plant we want to have in our arsenal for fighting the looming issues of malnutrition, deforestation and climate change which are intimately interrelated.

In the Sustainable Agriculture course at h.e.a.r.t. our professor Danny Blank teaches “the 5 Fs” for extending the growing season and improving food security in difficult climates. I will frame the discussion of the mulberry tree around these concepts. The fact that one plant can be used for all 5 criteria speaks to it’s miraculous versatility.

Mulberry is a prodigious producer of delicious and nutritious fruits. They are generally small and highly perishable but cultivars exist that are much larger and store better than others. There is a surprising amount of excellent fruiting varieties with a range of colors and flavors. In the United States, most fruit in the Spring but some varieties are known to produce several crops throughout the year. Of all of the incredible merits of the mulberry, the best is perhaps the look of joy that people express when they first taste the excellent sweet fruit. The fruits can be enjoyed fresh right from the tree (my favorite) or on salads. They are great dehydrated like raisins or made into jams, jellies, pies and many other fruit based items. I suspect they can also make great fruit leather for long term, low-tech storage. We have nearly 10 select fruiting varieties at h.e.a.r.t. planted for fruit and are always gathering more. 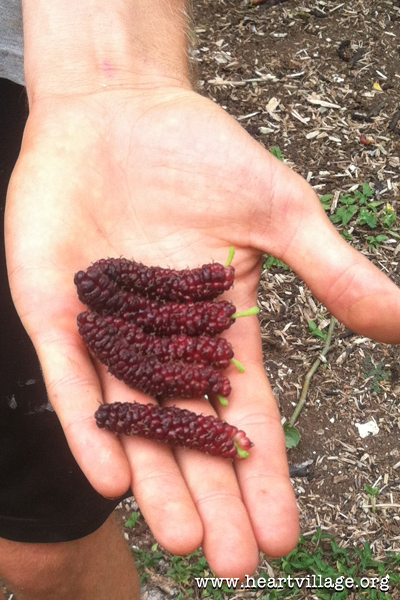 The “Himilayan” mulberry at the Fruit and Spice Park in Homestead, Florida has very large and incredibly delicious raspberry flavored fruit with a long fruiting season. This variety thrives in the hot humid climate of South Florida and therefore likely has potential in tropical climates.

I learned from edible plant extraordinaire, Eric Toensmeier, that some species have edible leaves that can be good tasting and are unusually high in protein for a leaf crop. Of all the uses of mulberry this is probably the one with the most potential to fight malnutrition. Eric’s article on perennial staple foods of the world shows mulberry leaves to produce more protein per acre than soybeans in a system that only needs planted once and may outlive the person planting it. This information led me to start collecting mulberry varieties and trialing them for flavor and texture. I have found a variety I think tastes very good after being steamed until soft. I cooked a sample batch for some h.e.a.r.t. students and it was well received and some commented that it tasted like green beans. Dried white mulberry leaves are also sold as a tea and have long been used as a medicinal tonic in China.

Not long ago, an agricultural specialist was visiting h.e.a.r.t. and she commented that many people doing development work in cold climates write her seeking out “their moringa”, meaning a perennial cold hardy leaf crop that is rapidly growing on poor soil, highly nutritious and tolerates repeated cutting. I believe that select edible leaf forms of mulberry just may fit this bill, playing a similar role to plants like moringa and chaya in warmer climates. A system of mulberry leaf production would be managed through a technique called coppicing where closely spaced trees are cut often to encourage new growth and make continuous harvesting easy. 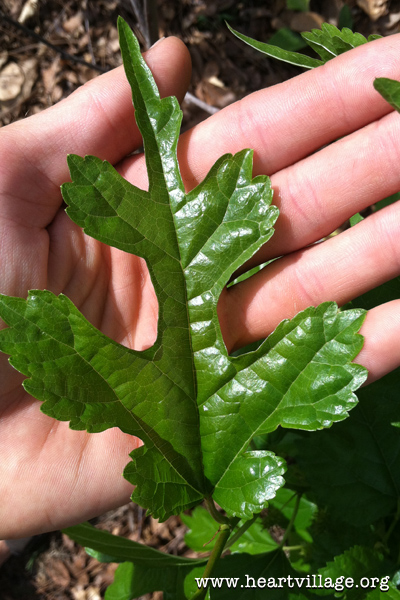 This variety of mulberry (Morus alba) has good tasting and nutritious foliage once cooked.

With wise design mulberries can become milk, meat and eggs.

It is already widely known in many places that mulberry trees are very reliable producers of high quality animal fodder. At h.e.a.r.t. we have trees planted at 2 foot spacing that are cut often and leaves are taken to goats and rabbits. It is an excellent fodder species because of it’s rapid growth, high nutritional profile and tolerance of cutting. A mulberry promotional document from FAO claims that the leaves range from 15-28% protein. Mulberry is very easy to propagate from cuttings, making it feasible for anyone to establish many plants quickly with basic nursery techniques. Chickens also love the fruit,meaning long season varieties could be planted in chicken runs to provide self harvesting feed that drops to the birds while also providing shade and wildlife habitat. Mulberry leaves are also the premier food of silkworms which can be raised and used as chicken food. With wise design mulberries can become milk, meat and eggs.

This rabbit is pleased to eat nutritious mulberry leaves and produces useful manure as a byproduct.

Live fences are planted to keep animals in or out and, in some cases, to deter humans. In many cases, a lack of fencing is the key element that keeps people hungry. Roaming animals, such as goats, make keeping gardens nearly impossible. Often times, farmers let goats and cattle roam during the dry season under the assumption no one is trying to garden anyways. This disincentives people from trying even though with a small amount of water they could still produce food. A fence that excludes those animals can dramatically change this situation but unfortunately fencing is very expensive. Live fences, however, can be entirely free other than labor. Mulberry can be a great species to plant for this purpose. The trees establish quickly and can be pruned to the desired shape. Barbed wire can be tacked to the trees or thorny sticks and bamboo can be woven between them. In some places people actually rub the bark off of the trees and tie them together and the trees fuse together permanently to make a woven fence.

The need for cooking wood and the production of charcoal is one of the largest contributing factors to deforestation. Many trees die once they are cut and the demand is simply so high that forests are completely gutted. In order to combat this people must plant trees specifically for firewood so the forests can be left to regrow. Mulberry has the special ability to regrow readily from coppicing so it can be cut annually, indefinitely. The wood is very dense and hard which means it has a lot of fuel energy. I know from personal experience of cutting a fallen tree with a chainsaw that the wood is very tough. Small mulberry twigs are ideal fuel for efficient wood burning cooking implements like rocket stoves. 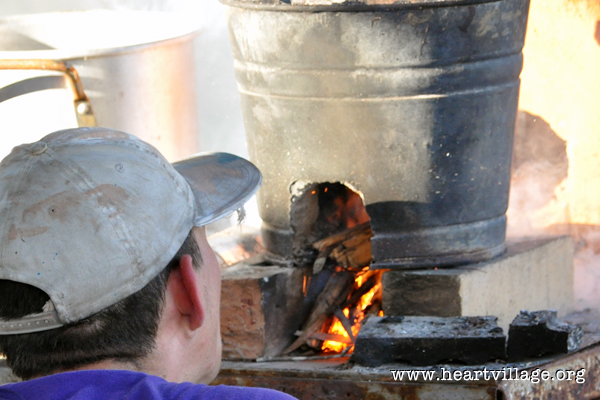 Small twigs from trees like mulberry make ideal fuel for a rocket stove.

Not only is the tree so versatile, a number of these uses can be accomplished in one multi-functional system.

A live mulberry fence could be planted around a chicken run. Branches are cut. The young leaves are fed to humans and tough leaves fed to herbivorous animals. All the while, twigs for burning in the rocket stove are produced. Any fruit that is produced on the trees will fall to the chickens that are being contained by the tightly planted trees.

A tree with such a diverse set of uses should be exploited more in a world of such dire need. I hope you are now inspired to plant a mulberry tree! 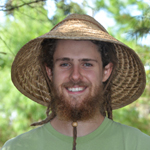