According to most scholars, Jesus mentions the poor and needy more than 400 times. He mentions heaven a little over 100 times. Although it seems that modern Christianity focuses on heaven and hell a lot, it is clear that Jesus did not focus on them near as much as he focused on the needs of this world. Almost every writer of the New Testament books mentions the poor. The law God gave to the Israelites gives specifics about how the poor and strangers in the land are to be treated. It seems to me that when someone mentions something specifically, it is of serious significance. Even the angels of the Lord are not mentioned as often as those who cannot defend themselves, are marginalized or aliens within a society.

The author of the book of James has traditionally been viewed as being the brother of Jesus and the head of the Jerusalem Church. James says that God honors the poor. In Galatians, Paul mentions that James and the other elders of the faith remind him to remember the poor as he travels and shares the Gospel among the Gentiles (Galatians 2:10). Once again James is writing to believers spread throughout the known world and he feels it important enough to mention the poor. In Acts 10:4 the author tells us that Peter told Cornelius, “Your prayers and gifts to the poor have come up as a memorial offering before God” (NIV). The words “memorial offering” refer to Leviticus 2:2 where the Lord directs how a Memorial offering is to be performed. Leviticus describes this offering as “an aroma pleasing to the Lord” (NIV). This means that when we are kind to the poor, remember and pray for the poor and give to the poor, it rises before the Lord as a pleasing aroma. In a way we might say that as we remember the poor, God remembers us. 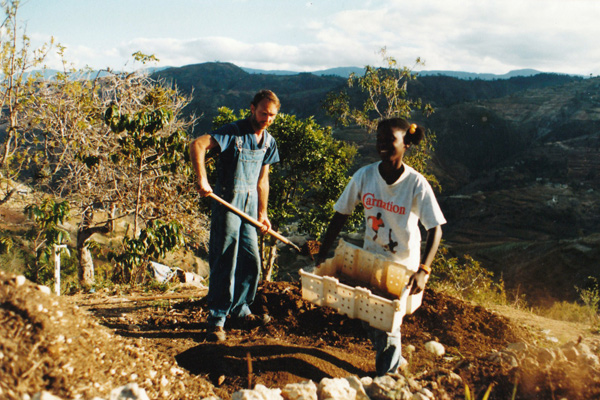 Phil and his wife, Lonnie, worked alongside Haitians for 21 years.

When my wife and I returned to the United States in 2007 after serving in Haiti for 21 years I was feeling like I needed to find a way to remember those I had served for so long. How could I live in luxury and still stay connected to those I cared so much about. In 2011 I heard a sermon about how God has commanded us to remember the poor. I soon began to find unique and significant times to remember and at the same time be thankful for the provisions God gives to me. As silly as it may sound I remember the poor when I take a hot shower or enjoy a nutritious meal. I remember them and pray for them and remind myself of the blessings of God. Ezekiel 16:49 says, “Now this was the sin of your sister Sodom: She and her daughters were arrogant, overfed and unconcerned; they did not help the poor and needy.” Now, we have all heard dozens of sermons about why God destroyed Sodom. Have you ever heard one based on this scripture? I don’t know about most people but for me this hits really close to home. Even in the American church we are overfed and often find ourselves unconcerned about the poor. We often find ourselves saying things like, “the poor just need to work harder” or “if they just loved the Lord like we do…” This is our arrogance.

The modern, Western Church has done an incredible job of spreading the Gospel around the world. The church has used technology and knowledge to make great strides in sharing the good news. Although we have done a great job of “going into all the earth” I cannot help but think that we have been missing out on the “Cornelius” blessings of the memorial offering. I pray that we all find ways to live and celebrate our faith in such ways that our thoughts, prayers and gifts for the poor come before God as a pleasing aroma.