From Pasture to Pantry: Raising Goats as a Food Source 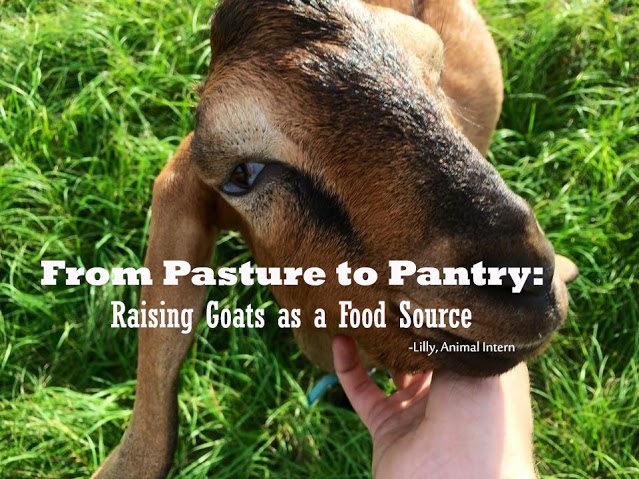 Goats have long been a significant animal in terms of farming and herding. Used for milk, meat, and textiles, they have roots in most of the continents, supplying a stable food source. Just last week, h.e.a.r.t. students, interns, and staff went to Haiti. There, the goat population was booming. Most of the families that owned goats were using them for meat and market appeal, and a few were using them for milk. As they are an easy livestock animal, they are perfect for any homestead from the mountains of Haiti to the Great Plains in Nebraska.

Picking a variety suitable for your situation, whether you want milk or meat, can be difficult. A couple factors to consider for your optimal goat are milk production, meat production, heat tolerance, and parasite tolerance. Dual purpose goats, like Nubians, produce both meat and milk and are perfect for a hot, parasite ridden climate. Alpine, Saanen, and Toggenburg goats are considered milk goats and are optimal for a cooler, less humid climate1.

In most varieties, the nanny can be milked for up to a year after she has kidded if you keep her on a strict schedule and milk her daily2. It is not advisable to start milking before the kids are one month of age. While milking, many things can taint the taste of the milk, making it taste musky or “goaty.” Keeping the buck close to the nannies, preventing him from spraying them through fences, and feeding the goats a full diet of commercial pellets, are two of the major factors affecting taste.

Goats need a stable diet of forage, meaning green leafy crops and grasses3. Often, the easiest way to feed their ravenous, on-going hunger, is to let them loose into a field and leave them for a few weeks. Unfortunately, this leads to overgrazing and a boom in the parasite population. A healthy alternative is weekly pasture rotation and a daily “cut and carry” feeding method, meaning cutting green leafy crops from a fodder bank and manually bringing it to the goats to munch on. moringa (Moringa oleifera), mexican sunflower (Tithonia diversifolia), and napier grass (Pennisetum purpureum) are excellent crops for the cut and carry method. These are some of our favorites here at h.e.a.r.t.!

As goats are prone to parasites, extra attention is required to this aspect of their well-being. The easiest way to prevent worms of any kind is weekly pasture rotations (allowing any parasite eggs to die in the three-plus weeks that the pasture sits empty) and monthly deworming. Dewormer can be bought at vet offices or ordered, the most common one being Ivermectin. If your goat does end up contracting parasites, don’t fret! Many goats have contracted parasites (usually a barber pole worm)4, and if spotted early on, the treatment is usually fairly pain-free. Often, an extra dose of dewormer, with the discretion of a vet, will do the trick. Unfortunately, there are some persistent types of worms. One in particular causes a condition known as bottle jaw, where the mouth area swells up and extensive weight is lost. A vet may need to be consulted in this situation, due to the rapid weight loss of the goat.

Goats come into heat every 21 days and will show that they are in heat by “standing” for the buck. They have a five month gestation period, often kidding one to three kids. When the goat is about two weeks from kidding, the muscle above her tail will appear to be relaxed or entirely absent; however, one should not rely on just this to predict kidding time, rather should keep lengthy records of all goat breeding. It is not advisable to keep a buck in with the herd at all times or more than one buck, as unplanned pregnancies are bound to occur.

LILLY SMITH
A 2014 h.e.a.r.t. Graduate, Lilly is now an Animal Intern in the village. She is extremely passionate about animal husbandry, and has a goal of studying to become a veterinarian missionary.